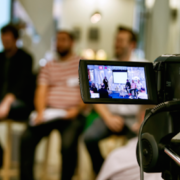 Today, live streaming is considered to be one of the hottest trends around when it comes to event-based tech. Unfortunately, it’s highly misunderstood too – as it’s novel and exciting nature often define it as highly confusing for many companies.

With platforms like Periscope and Facebook Live becoming increasingly popular, it’s worth learning how much of a role video could play in your upcoming events, which is why we’ve put together this list of common myths that exist regarding live streaming.

Your event doesn’t need thousands of people or a huge venue to be a success. Remember that live streaming extends the interaction with your event beyond the existing room or venue that you’ve chosen, helping to get people involved with the action from all around the world. In other words, even if your event is incredibly small, you could quickly up the attendance with some carefully accessed video.

This concern is understandable, as if someone has the option to stay at home and watch your event, you might wonder why they’d bother to buy tickets and turn up in person. However, the truth is that live streaming might actually grow your audience. Resources have found that 30% of the people who watch live streamed events will actually attend that event in person the following year.

3.    Livestreaming is Too Costly

Running a high-quality video stream into even a small event must be seriously costly right? Wrong. According to various resources, there is a range of different options out there for those who are operating on a budget – from accessing Facebook Live from a smartphone to buying a relatively inexpensive camera. The chances are that the event will pay you back in interest, anyway!

It can be terrifying for businesses to think that they’re investing money and time in a video that no-one will end up watching. However, the truth is that if you have an audience on social media – you’ll probably get at least some kind of response. Facebook Live reports that users watch live video for 3x longer and comment 10x more than they do on recorded footage.

5.    The Value of your Video is Restricted to the Event

The great thing about live streaming and video content – is that once the stream is over, you can repurpose the footage that you’ve captured for various events and marketing materials. For instance, footage from a previous year can be redesigned to create teaser videos for upcoming events, and to remind followers of exceptional experiences all year around. In other words – it’s not just a brief investment.